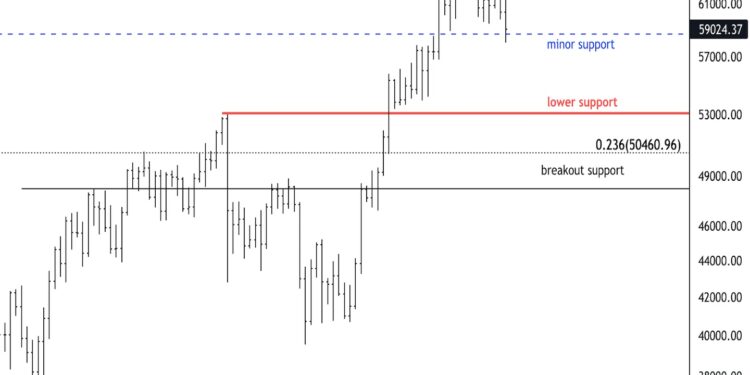 Bitcoin continues to decline after buyers failed to sustain last week’s all-time high of around $66,900. Analysts pointed to extreme optimism, leverage and profit-taking as possible reasons behind the latest pullback in BTC’s price.

A pullback was overdue and more downside volatility could be in the offing, CoinDesk’s Omkar Godbole reported. For example, the estimated bitcoin leverage ratio, which is calculated by dividing futures’ open interest across all exchanges by bitcoin reserves on exchanges, is at the highest level since September, which preceded a crypto sell-off.

Bitcoin’s near-40% price rally over the past month was largely due to investor enthusiasm for the first bitcoin futures-linked exchange-traded fund (ETF) introduced by ProShares last week. But some analysts expect the ETF hype will fade.

“Once investors realize that these futures ETFs create no new demand for BTC and are only a side bet on short-term price appreciation we may see significant price erosion,” Charlie Silver, co-founder of Blockforce Capital, a crypto multi-strategy trading firm, wrote in an email to CoinDesk.

“After a week of fresh highs, today’s sell-off is a warning not to be complacent in this market, especially when high levels of volatility are always around the corner,” Nicholas Cawley, an analyst at DailyFX, wrote in an email to CoinDesk.

So far, the new ProShares fund’s returns are falling short of the performance of bitcoin in cryptocurrency markets – the very thing the ETF was supposed to track. BITO is also underperforming the Grayscale Bitcoin Trust, or GBTC, which at $35.23 billion is the world’s largest bitcoin fund, CoinDesk’s Lyllah Ledesma reported.

From Oct. 19, when the ProShares ETF started trading, through Tuesday, BITO shares were down by 2.45%, based on a chart shared by Grayscale, the company that sponsors GBTC. Bitcoin was down 1% over the same period and GBTC was up 7.5%. (Grayscale is a unit of Digital Currency Group, which also owns CoinDesk.)

The chart below shows a spike in short-term holder selling activity on Wednesday, as noted by CryptoQuant. Still, some analysts expect buyers to remain active on price dips, which typically occur during the early stages of a bull market.

“For the first time in a long time, a significant profit-taking has come in bitcoin, giving the market a short-term buying opportunity,” wrote one analyst on CryptoQuant’s live feed on Wednesday.

Shiba inu briefly surpassed dogecoin: The self-proclaimed dogecoin killer, shiba inu, briefly surpassed DOGE in market value on Wednesday, CoinDesk’s Muyao Shen reported. Both coins now have a market cap of over $31 billion, and are toggling between 10th and 11th on the CoinGecko’s rankings page. Blockchain data shows that while SHIB continues to attract retail investors around the globe, more sophisticated crypto traders fueled the latest rally. Since the start of this week, addresses labeled as “smart money” started buying SHIB, according to Nansen research analyst Daniel Khoo.DBS joins Hedera Governing Council: Singapore’s DBS bank has become the first Southeast Asian lender to join the Hedera Governing Council, CoinDesk’s Sebastian Sinclair reported. The bank joins a council that includes 39 other organizations including Boeing, Deutsche Telecom and Google in supporting Hedera’s Hashgraph, a software that can process transactions and store a public ledger of those transactions. Council members serve three-year terms that can be extended to a maximum of two terms.Solana-based yield aggregator Tulip raises $5 million: Solana-based decentralized finance (DeFi) app Tulip has closed a $5 million funding round to expand its yield aggregation and crypto lending products, CoinDesk’s Danny Nelson reported. Tulip, which holds over $800 million in crypto assets according to Jump Capital and Alameda Research, is looking to use the investment to double its five-person team, which could prove difficult due to a Solana-focused engineers shortage amid heated competition for DeFi developer talent, CEO “Senx” said in a phone interview with CoinDesk.

Most digital assets in the CoinDesk 20 ended the day lower.

A Need for More Regulatory Clarity 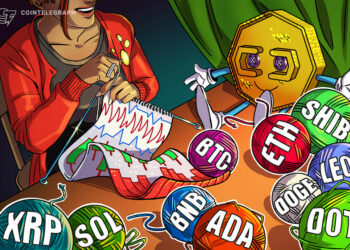 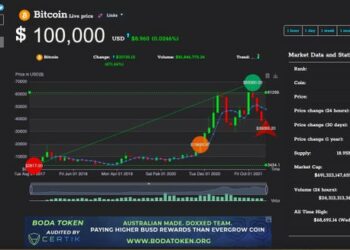 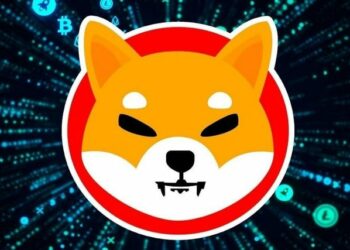